Hi Tech Pharmaceuticals Arimiplex PCT was designed to be the ultimate in post cycle therapy. After a cycle of anabolics, the #1 priority is to get your body’s testes (gonads) making free and total testosterone again as your natural production is shut down. The other issue at hand is controlling estrogen, as your body will naturally elevate its production on cycle to reach a sense of homeostasis to match those high synthetic testosterone levels.

Arimiplex PCT addresses both of these issues, kick starting your body’s natural testosterone production back on while controlling estrogen to keep the negative side effects at bay. Not leaving you high and dry in the process, Arimiplex PCT was also designed to help you preserve your cycle gains with ingredients that have an anabolic effect on protein sparing & synthesis. Rounding out the complete profile, Arimiplex PCT also addresses the issue of the tax your organs can take by including liver regeneration & detoxification compounds to help assist in your body’s repair from previous cycles.

had a buy one get half off and it was everything I was looking for in a PCT. Looking forward to this after I run Halodrol. Also, love when they throw in those samples!! CRAZY FAST DELIVERY!! 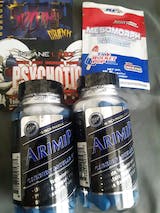